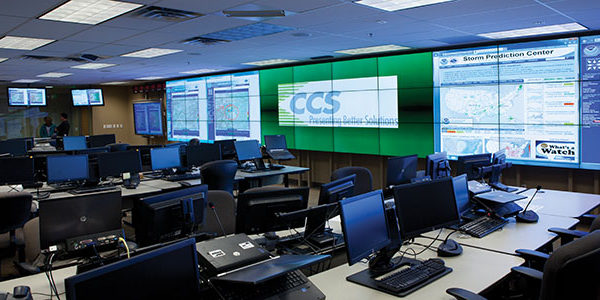 During the mid-summer, when the Colorado State Emergency Operations Center (SEOC) in the Denver suburb of Centennial was undergoing a long-delayed AV makeover, www.shootingtracker.com, an online database of mass shootings that claim four or more victims, logged more than 30 such incidents around the country. None were in Colorado but, as Ed Kern, AV Systems Designer with the Denver office of CCS Presentation Systems (www. ccsprojects.com), the integrator that did the renovation, spoke during our interview, it was within a week of the rampage at a 38 Sound & Communications January 2016 Colorado Springs Planned Parenthood center and the day after an even worse one in San Bernardino CA.

There was little that could be said about either horrific event but, collectively, they did underscore the need for a state-of-the art emergency operations center that could bring up video and audio from a wide range of sources, manage it across multiple displays and help representatives from police, fire, medical and other emergency services make sense of life-and-death situations that range from crimes to weather disasters, and other emergencies that seem to unfurl faster and more often every year. The state’s existing SEOC, the central hub for all tribal, local, state and federal agencies to coordinate responses to hazard events, incidents and disasters throughout the state, had been a bit of an AV time capsule. Its AV complement consisted primarily of six-foot dropdown projection screens, overhead projectors and three 42-inch plasma screens, with audio distributed through low-voltage ceiling speakers. Workers at the nearly 60 workstations in the 25’x60′ SEOC had to contend with aging equipment that couldn’t handle the growing number of sources, such as news broadcasts, emergency communications, and satellite and internet feeds. In addition, the AV was barely coherent: The width and depth of the room, along with a barely nine-foot ceiling, made it difficult for some team members to see critical information being displayed on the projection screens. Visibility issues extended to the projected images themselves, which were not bright enough for many team members to view clearly. And dimming the lights rendered the environment adverse to videoconferencing, which is a feature team members use for their day-to-day activities. Finally, the audio was underpowered and often barely audible.

At the time, CCS’ biggest challenge was designing solutions and integrating them in the space of just 30 days, a time frame Kern described as “miserable” and one compelled by state accounting exigencies, and by the fact that the SEOC would have to be completely vacated during renovation. Its functions would have to be relocated elsewhere temporarily, spread out among other nearby EOCs. The SEOC could be offline for a maximum of a single month, especially during Colorado’s summer fire-season months. The task seemed daunting enough that the state employees had a pool going, betting how many days over deadline the installation would be finished. Fortunately, the job window fell in between large projects on CCS’ own schedule, giving the company the manpower and programming resources required to finish on schedule.

At the top of your educator’s wish list: interactive projectors
May 12, 2019

Reviewing The Attributes Of An Education AV Design
February 1, 2019